Bill Gates: A new villain has entered the stage

The Bill Gates narrative revolves around classic ideas that the founder of Microsoft seeks to gain more profit from selling vaccines against coronavirus. Some outlets explored the connection between Bill Gates and the WHO – specifically insisting on the fact that organization has changed after Bill Gates foundations started to sponsor WHO. It is mentioned that WHO had internal documents on quantitative criteria of a pandemic, but in the mid-2000, these were cancelled. Some other sources conveyed the idea that Bill Gates considers himself a public health officer or even the representative of the interests of the humankind and is being supported by the Pope in his COVID-19 vaccine initiatives, which are deemed unsafe.

A classic conspiracy of Bill Gates and mass chipping found its voice in a local perspective. The narrative regarded a Lviv-based entrepreneur and doctor who announced on his Facebook account about latest innovations in medicine – such as the possibility to implant in-skin biochips of bank cards. This fact was taken as a foundation for the narrative that mass chipping has been launched in Ukraine by a Lviv-based doctor who is also related to the renown Rotary organization that allegedly has ties with masons. 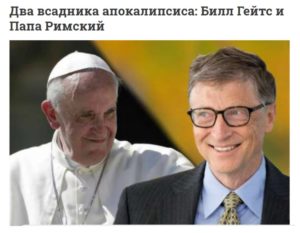 The two horsemen of the apocalypse: Bill Gates and the Pope
Source: nk.org.ua 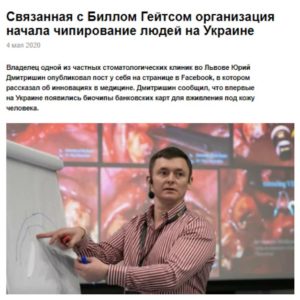 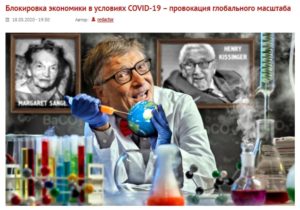 Union of Orthodox Journalists – a website with religious touch – covers the narrative that Bill Gates explores ways to reduce the world population – through abortions, reproduction methods and vaccination. While the first two seem to be popular, the source indicates that vaccination can be achieved only if there is a real or fake threat for human lives – which means a pandemic. The website operates in Russian, Ukrainian, English, Romanian and Greek. 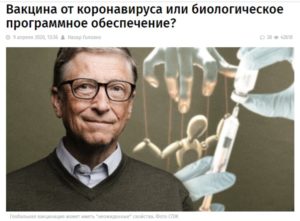 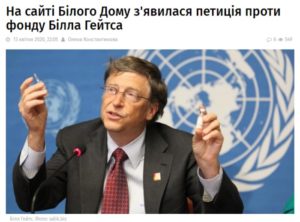 A petition against Bill Gates was published on the website of the White House
Source: spzh.news

Andrii Kozak – a Ukrainian blogger and civic activist is a vehement supporter of the trend that COVID-19 is a global hoax. He is active in social media and promotes the message that quarantine measures all over the world are a conspiracy between the international organization such as the WHO and the IMF, and Bill Gates:

“There is no need to answer why the WHO is doing everything that Bill Gates orders, because it is difficult to lose 30% of funding, and certain leaders of the organization get their share of the planned scam”

His Facebook bio states that he is a “Christian. Ukrainian. Believes in Sincerity, Kindness and Love”.

Urgently! Coronavirus is the biggest lie in human history?! Who is to reap in the benefits! Read below!
Source: Facebook.com

Bill Gates narratives target nationalist and religious audiences and aim to promote and deepen anti-capitalist and anti-international organizations sentiments. The narrative circulates in Russian and Ukrainian.

Reuters published in a fact-checking article that Gates did mention the possibility of having a “digital certificate” for health records “eventually,” but he did not say these certificates would be “microchip implants.”

Russia: A Tale of a Superhero