COVID-19 is a mass psychosis. The president’s unique perspective on the outbreak

Aleksander Lukashenko and his unique stance on the COVID-19 pandemic as a mass psychosis is a topic worth describing in an independent article. In his speeches he comprised almost everything – from conspiracy theories, narratives that undermine the risk of the coronavirus, unreliable recommendations on how to fight the virus and numerous attacks on opposition and foreign actors. All of these were politicized in an attempt to mask and „beautify” the political and economic reality in the margins of presidential elections. Thus, lately, one of the main messages of the president has been that the government proved itself efficient in fighting the pandemic:

“The system that we have, the discipline and coordination in the healthcare system, have helped us withstand in such a dense and open city (Minsk). Belarus defeated COVID-19. The current healthcare system has withstood” – President Lukashenko said. 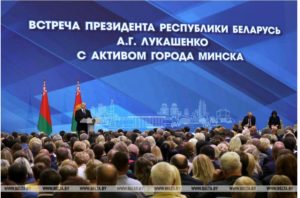 In a series of Ping-Pong statements with the leaders of Russian propaganda – Kremlin controlled media and politicians, Lukashenko took the position to criticize and point at Russia’s management of the crisis which presumed severe quarantine measures as absolute stupidity given the high number of coronavirus infected citizens in Russia. The root of this informal feud is the fact that Belarus held the Victory Day parade on the 9th of May while Russia had to postpone mass celebrations because of the coronavirus crisis. This made Putin criticize the “alternative methods” of dealing with the virus and provoked a wave of acid statements from both sides. 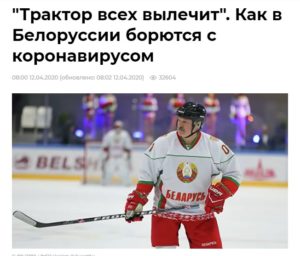 The tractor will heal us all. How people in Belarus treat coronavirus
Source: ria.ru

As an attempt to diffuse mass panic, Lukashenko embraced the roles of a doctor, naturist and a good, familiar adviser. During the pandemic, Lukashenko promoted traditional ways of dealing with the infection, such as: drinking vodka, going to sauna (The Chinese told us that the infection cannot stand the temperature +60 Celsius) and work on tractors. He has also encouraged people to drink alcohol as it will poise the virus:

“Recently, I have been joking that not only do you need to wash your hands with alcohol, but probably take 40-50 grams of alcohol a day…to poison this virus.”

In this context, Lukashenko likes to show off as fearless – he holds daily meetings on economic activities, organizes visits to enterprises and regions – neither himself, nor his accompanying persons use any protection equipment.

COVID-19 as a mass psychosis is the most visible and famous narratives of Lukashenko.  He is using this “image” to brand international actors. According to Lukashenko, the civilized world got crazy and politicians started to use the situation to their own benefit. On an optimist note, he added that the fast spreading of the virus has helped improve the Belarusian public health system. 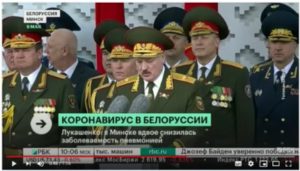 At the Victory Day parade on the 9th of May
Coronavirus in Belarus. Lukashenko: The number of pneumonia cases has lowered twice in Minsk
Source: Youtube.com 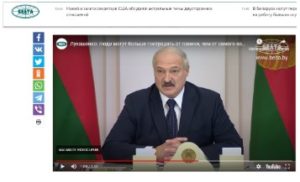 Lukashenko: People may suffer more from panic than from the virus itself
Source: Belta.by

The national state television – BELTA – is frequently mirroring Lukashenko’s statements:
“Despite my critical attitude, I call this coronavirus nothing else but a mere psychosis and I am not going to give it up. We have been through a lot of psychosis and we know what these led to. I am strongly convinced that it is just another psychosis that will benefit ones and will harm others.”

Amid the waves of critiques from the side of international community for not imposing strict measures in the context of pandemic, Lukashenko stated that there have always been viruses and we have to adapt to live with these. He mentioned: “Doctors already know what to do, how to treat these, while each citizen should take care of himself. We need no quarantine. There are the others who are pushing us to do it, but there is no need for it. On the Easter, I and the rest of population went to the church – how can I forbid that? I cannot impose isolation, I can only recommend.”

The president also added that the no-quarantine experience of Belarus is being adopted by other “rich countries”, such as Russia.

As an attempt to prevent mass panic about COVID-19 and the precarious economic situation in the country, maintain people’s attention to the government-controlled communication and discredit the opposition, Lukashenko took a strong stance on fake news. He explained that it is the opposition, the alternative press and social media platforms that spread fake news and thus they prove that they are against Lukashenko:

I have noticed that the so-called fake channels, Telegram channels and the like have been snapping at the authorities at every occasion recently. They are trying to cause a scandal over underpaid money in some specific organization, be it money for doctors or teachers and so on. (Source: Belta.by)

This is a certain group of people. They have hated and continue to hate Lukashenko and believe that they should heap more problems on him, so that he stumbles and falls. We have seen this before and we see this now. We need to stay calm and simply tell people the facts,” (Belta.by)

Another manipulative narrative of Lukashenko is targeted to claim the efficiency of the government in maintaining the situation under control. The climax of this narrative flow is Lukashenko’s glorious statement aired on the state television that: “Belarus has defeated coronavirus”. Besides, loyal politicians and state actors have frequently and predictably supported the narrative. For instance, the Minister of the Interior of Belarus mentioned in an interview that Belarus manages to handle the situation better than other countries: “Situation in Belarus is under control, and I don’t think that if we had had total quarantine, we would have had better results.”

Conspiracies served on the plate: Case of Belarus